Chance sets his sights on flying

Chance went with his dad to work today (when written not posted) to celebrate take your son to work day.

An airplane from the local University was there. Chance and his brother got to climb inside the cockpit and their radiating faces say everything that needs to be said about how they felt about the moment. Chance wanted to know about this idea of becoming a pilot. So when it was the question and answer session, Chance raised his hand and asked how much it cost to get a pilots license.

The answer was $45,000. Whew. We're going to have to hire Chance out right away to help earn some cash to go towards this goal. I think he should go for it if he wants to though:)
I can envision Chance in his flight jacket taking the controls of a commercial airliner.......I wonder if his dad and I would get to take an extra carry-on item if Chance is the pilot on the plane?

I'm sure we could at least tour the cockpit :)
Posted by Chance's Mom at 4:57 PM No comments:

Chance learns how to do drugs

Today (when written, not posted) was take your son to work day at Chance's dad's work. Chance and his brother have been so excited for this day.

There are all kinds of cool things like learning what a police officer does and the insides and outsides of a job in aviation. Besides, they get to spend the day with their dad.

Today there was a session on drug use for the kids. A police officer talked about how drugs might be presented to the kids and talked about the after effects on people who have done drugs.

Chance couldn't hear very well though, so he kept asking his dad questions. After some of the topics addressed in the session, Chance was quite confused about what was being said. It was a crowded teaching environment so his dad couldn't really go into lengthy explanations. Chance's dad asked him if they should move up closer to the front so that he could hear better. Chance didn't want to. He was probably embarrassed because the presentation had already started.

His dad called me after the session and said that we would need to sit down and have a talk with Chance about drugs and what was said about them during the session.

"So basically, Chance just learned how to do drugs by the pictures presented because he couldn't hear what was going on?" I asked holding back a laugh.

"Maybe." His dad replied slyly. (we're going to have to really focus on the AFTER pictures of the effects of doing drugs)

Well then. This situation is not presented in any of the parenting books:)

We'll have to help Chance learn that if he can't hear, he needs to move up closer to the front or do whatever is needed to make it easier to hear what is being said.

I think we're going to be having some interesting conversations at our house for the next couple of days:)
Posted by Chance's Mom at 4:42 PM No comments:

For any of you who don't know by now, the movie,"High School Musical"(1,2 and 3), has taken the kid world by storm.

We went on a trip to visit Chance's grandparents and the kids watched "High School Musical", as we drove.

At one point during the movie Chance turned to his brother and said," I know what the girl's name is. It's Gabrielle."

Chance commented on several things about the movie and asked questions when he missed something.

I hope he always feels secure enough to ask questions when he doesn't hear. I realize that we are his family and so he doesn't have to be too brave to ask us to repeat things. But I have noticed that Chance will ask other people when we are out and about if he misses things. He may ask me what was said or to ask them again, but if it is a situation where he can do it, I tell him to ask.

This is one of those life skills that he will have to learn to do. Many many times in his life.
Posted by Chance's Mom at 10:20 PM 1 comment:

Chance reads very well. He is at the top of his class and takes piles of books with him when he heads off bed.

One of my concerns is that as his reading level goes up, so does the use of symbolism, comparisons, idioms and allegories in books.

There are scriptural allegories about grafted trees and the house of Israel. "Where the Red Fern Grows", talks about the symbolism of the red fern.

Then there are the phrases such as "runt of the litter," "like a bat out of heck"(edited to keep this a family show), "sleep like a baby", and "beat around the bush." These are phrases that people assume we all know.

I have no doubt that Chance is capable, I just think it will take more work to help Chance catch on to some of the things that come up in more advanced reading levels.

Having spent the past few years helping Chance acquire language and playing some catch up with language, Chance is moving on to more advanced language. This is a very good thing.
I just hope we do a good job helping him move to that next level.

I do love the way Chance's eyes narrow and his eyebrows go up when he says,"What?" When a phrase is used that if taken literally sounds, well, weird if you don't know the meaning. Like,"Hit the road Jack." Or " She is green with jealousy."

A whole new world of language awaits Chance! I just want us to be ready to take the ride with him.
Posted by Norm Paxton at 11:57 PM No comments:

"A policeman came and talked at my school today." Chance told me as he munched on his after school snack of cereal and milk.

" What did the policeman talk about?" I asked Chance expecting one of the usual policeman-like subjects like drugs or stranger danger. I would never have guessed the answer Chance gave.

Violets? The police are now going to schools and giving out botony tips?

Our minds are amazing things and as I sat repeating the word violets in my head trying to give some context to what the policeman could have been talking about, it hit me.

"Ya." Chance replied completely unpulsed by the vast difference in those two words.

Then I asked him what the police man had said about violence. Chance proceeded to reenact a skit that the policeman had done during the assembly. "He was funny." Chance said laughing.

Violets. It is amazing how hearing just one little word off can completely change everything.

Chance could have been one mixed up little puppy.
Posted by Chance's Mom at 11:39 PM No comments:

Chance's little brother is potty training and Chance is enjoying helping out by getting the potty treats when the deed has been done.
He also participates in the potty dance which we do each time a tinkle is completed. 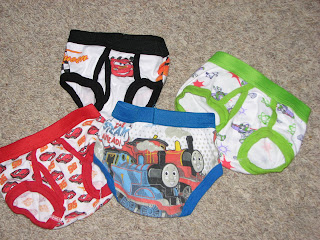 hink all of the kids are slightly jealous of the toddler underwear that has come into our house. There are Nemo undies, Buzz Lightyear undies, cars undies, Wall-E undies, but most important of all, there are Thomas the Train undies.

Having Thomas the Train undies gracing our house again, brought back a memory of Chance and how excited he was to have a train on his hiney. So excited in fact, that he decided that his friends in his deaf class at school must see the beauty of them. Actually, I think it was a collaborated effort between Chance and one of the other boys. In the end, 3 of the 6 kids in class decided to compare underwear.

I got an email from his teacher that had been passed on to her boss about the flashing incident. When Chance got home from school and I asked him what he had been doing, he informed me that ,"He didn't believe me when I told him that I had Thomas the Train underwear on! So I showed him." His language was not that correct at the time, but that is what he said give or take a few words.

Apparently, after Chance had shown his undies, the other two kids had to show that they had cool undies too. This came out later when I was talking to his teacher.
Although, flashing one's undies(no matter how cool they are) , is not proper etiquette, it is no wonder that these kids felt so comfortable with each other.

The building where Chance had two years of preschool, had one bathroom which was a unisex bathroom and there was no main door to close. So after three years of sharing this bathroom with the same classmates, showing ones undies must not have seemed like that big of a privacy issue.

Chance does not remember this incident. When he made a remark about his brother not having any pants on and so you could see his underwear, I reminded Chance that he once had Thomas the Train underwear too and had wanted to show his friends at school.

"No!" Chance replied looking up from the wooden train set he was playing with(I am not making this up).

I tried to jog his memory but Chance just laughed at the thought. Perhaps all the doctors appointments, audiologist appointments and trying to hear took up the memory chips for that particular time frame in Chance's brain.

Well, Chance is not flashing his undies to classmates anymore. Of course now they are plain and boring. I'll always have the memory though:)
Posted by Norm Paxton at 12:10 AM No comments: