I love getting to know Chance as the years go by.  He is an amazing person and I feel honored to take this journey with him.

Chance has taken an interest in cooking.  This week he decided to make a cake as a treat to share with his friends during their late night (a night filled with games, food and or movies where the kids stay up later than normal with their friends).

He did not just want to make any cake, he wanted to make an angel food cake, his favorite kind.  We didn't have a boxed mix of angel food cake so I suggested that Chance make one from scratch.  He had done this with his dad once several months ago.

Chance was excited about this idea and set to work.  The recipe from Alton Brown that was used when Chance made the cake with his dad was in our cookbook.  It had been so delicious the first time, we made it a permanent fixture in our dessert section.

A homemade angel food cake requires 12 eggs.  That's right, a hefty dozen.  But you get lots of fluff for your dozen.

I was in with Chance's sister when Chance walked in and said,"I totally failed."

When I asked him how he failed, he explained that he had forgotten to separate the egg yolks from the egg whites before he added the eggs.

That did constitute a fail with an angel food cake.  But I thought Chance should try again and told him so.

As luck would have it, some neighbors of ours were selling eggs from their grandpa's farm and I had just purchased two dozen.

Alton Brown also suggests that you use the freshest eggs you can find:)

So Chance gave the cake another go.

Only this time he did not take any chances(ha!ha!).  He got online and looked up the Alton Brown video on how to make his angel food cake.

Chance would watch a clip of the video, go over and replicate what Alton Brown said to do, and then come back for the next video clip.

It is important to Chance to do well in whatever he endeavors to undertake.

This cake-making endeavor is a good example of how Chance does things.  He finds something he wants to do and works to excel at it.

The cake turned out delicious.  His friends got the lion's share of the cake, but I managed to get a slice for myself before it left the house.

Chance is going to succeed in whatever he decides to do in life, and I am excited to be on the journey with him.
Posted by Chance's Mom at 11:35 PM No comments:

If you snooze, you lose...at least at a scout camp out 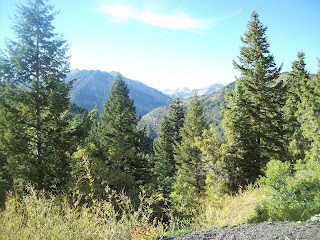 Chance had a scout camp out this week end.  He packed his backpack, rolled his sleeping bag, and made sure he had enough food to survive in the wilds overnight.The scouts played capture the flag and stayed up until the wee hours of the night. Who goes on a scout camp out to sleep? The tents are merely a formality.Come morning roll call, Chance kept sleeping.  You can do that when you don't hear anything going on around you in the morning.So while the other scouts packed up and ate breakfast, Chance caught up on his beauty sleep.Usually someone wakes Chance up in the morning at scout camp, but this time, there were a few distractions.One, Chance had some new scout leaders that are not experienced at camping with Chance and therefore it did not occur to them that he would need an extra hand in waking up.  The tweeting birdies and other scouts sloshing through out the tent were not enough to raise Chance from his sleep of the dead.The camp was also in a hurry.  One of the scout leaders had to get home earlier than usual, so the camp was in a hurry to pack up and go.By the time someone realized that Chance was still sleeping, the time for breakfast had passed and Chance barley had time to pack up his bedroll and head out when he awoke.Chance's friends are usually good about waking him up at scout camp.  This time there were several boys in one tent and they were all in a hurry after staying up late. Chance's dad talked to the new scout leader and just explained that Chance will most likely not wake up on time in the morning with out help because he does not hear the camp sounds or the boys teasing and talking.Once that was drawn to his attention, the scout leader said it make perfect sense.We hearing people don't always think of what it would be like to not hear anything in the morning because it never happens to us...some of those birds out in the wilds can be pretty darn loud in the morning. And scouts.  They are pretty darn loud in the morning too.None of this affects Chance's world of silence.Chance took it all in stride and I think everyone will be more aware during the next camp out.  Maybe this will help Chance never get kitchen duty first thing in the morning:)
Posted by Chance's Mom at 12:47 AM No comments: 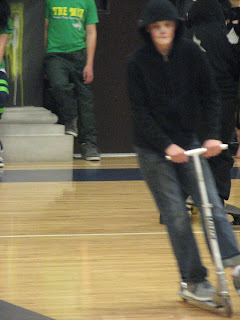 Chance's school put on the play, The Wiz" and as the picture to the left shows,  Chance got to be an expert at flying around the gym on his scooter accompanied by fellow students on various modes of transportation.

Originally Chance's brother was in the play as a lifter and back up singer and dancer.  A lifter lifts girls up in the air as they dance and run around the set. Someone has to have that job and Chance's teen age brother made the sacrifice.
After several weeks of practice, it became apparent that the play needed more flying monkeys. You can never get enough of those.   Chance's older brother generously said Chance would love to be in the play. Chance was not excited when he realized that he would be staying three hours after school on the regular early out day, not to mention several other days after school.  But it grew on him, and soon, he was enthusiastically taking his scooter to school each morning in anticipation of the afternoon practices. He was even designated the Toto carrier and got to whisk around the gym holding the remote controlled pup.
The play was a hit and the boys did a great job.
As parents we never thought of flying monkey as a future life path for Chance.  But he nailed it.