Trouble on the high seas

Chance and his brother have a job this summer mowing, trimming and helping with whatever yard work is needed with people in the neighborhood who have signed up for their services.

One generous soul told the boys that they could take his canoe out sometime if they wanted.  Today they took him up on his offer.

We bungie tied the canoe to the top of the van and off we went to a little body of water a few miles from our house.

Chance, his brother and two of their friends were quite excited to give the canoe a try.  They had some fishing gear, and I watched them set off into the water and told them I would be back in an hour and a half to pick them up.  There were sun bathers and swimmers in a roped off area off shore so the boys joined a throng of locals to partake of the water on a hot summer day.  The boys had all been canoeing at scout camp  so this was another opportunity to apply their canoeing  merit badge.  And I made sure they all had life jackets whether they were my son or not.

When I came back to pick the boys up, they were still out on the lake...trying to catch fish with their hands.  Chance hid his implants by the pavillion behind a rock so that he could hear as long as possible, but still leave  his implants on shore.  It is a toss in situations like this.  I want Chance to be able to hear what is going on with the other boys, but canoes full of teen age boys have been known to topple over and dispense of their occupants in one fell swoop.

The thought of two new implant sinking into the murky water and then netling into the mud on the bottom of the lake makes my stomach start to churn.

So, Chance of his own accord, decided to leave his implants on the shore.  We didn't even talk about it,  he just took care of things on his own.

I am always amazed how Chance and his good friends manage the communication gap when they are involved in activities like this that require Chance to take off his implants.  The funny thing is, Chance will still ask his friends questions when he is not looking at them sometimes.  His friends will respond, but Chance has no idea.  He can't hear or see them.  Most of the time, Chance just stares at their lips and uses his miraculous lip reading skills that he has honed.

In discussing the crankiness together in the car,  I helped the boys realize that both of them had things to learn from this moment.

Second, Chance's brother, who is usually fabulous about making sure that Chance understands what is going on when he can't hear, thought Chance knew the detailed plan they had hatched to catch a fish.  Chance, did not catch the detailed plan and started doing his own plan. With his super duper vocal abilities that come out when Chance can not hear how loud he is, Chance started telling the other boys HIS plan to catch the fish.  It was a miscommunication with an added measure of deafness to boot.

Not earth shattering stuff really.  Just a reminder that both of them can be a little more patient with the other and take into account the situation.
The boys are great buddies really.  That is why they were out on the lake together.  They enjoy being with each other most of the time.

Chance is a little do it yourselfer and when those implants are not on, it is hard to know what exactly Chance has decided to do on his own at times.  When I thought we had everything loaded into the van and were ready to head home, Chance started walking briskly down the path with his back to me going in the opposite direction of the pavilion where his stuff was hidden.  I watched him walk with purpose toward the other side of the lake and then asked his friend,"Where is Chance going?"
"Some of his stuff is over there."  His friend replied.

The next thing I knew, Chance was in the lake about waist deep.
"Why is Chance in the lake?" I asked out loud.

His brother replied, "Oh, there is a fish over there he was trying to catch."

Sure enough, Chance brought a fish to proudly show us all that he had caught it with his bare hands. He also showed us how the fish was missing an eye.

After Chance gathered his stuff and had his implants on, it was much easier to know what he was up to because we could just ask him:)

The boys had a great time and made sure that the time spent on seats in the boat was bout even.  There were two seats, so the boys took turns sitting on the seats and then just sitting on the bottom of the boat.

The boys have now decided that we should own a canoe.  I have to say that I agree.  That could be a lot of fun.

Sometimes being deaf doesn't matter, it is simply a matter of luck

Ahhhhh, the great outdoors!  Add in a few cousins, sprinkle in some aunts and uncles plus siblings and who could ask for anything more?

We spent a few days at a cabin in the mountains where Chance and his cousins slept out on the wrap around  porch.  So many cousins, and so little sleep.

On the second night, I slept in the loft with Chance's younger brother. A sky light was about 3 feet above my head, so when the hail started, I was clued in quite quickly that the clouds were releasing the small balls of ice.

Did I mention that Chance and his cousins were sleeping on the porch?  Chance doesn't hear hail hitting wood planks.  Even if he is laying on the wood planks.

I found Chance crashed on the rocker/recliner the next morning when I went down for breakfast. I figured he must be soaked to the bone.  His brother would have at least had a warning that something was amiss when he heard the hail start to fall.  Chance may have clued in when small pellets of ice started to smack him in the face.

As it turns out,  the cousin sleeping right next to Chance had to leave in the wee hours of the morning with his family. Chance had moved into the cabin when he'd felt his cousin dragging his sleeping bag into the house so he could fold it up and leave for home. It helped that Chance was cold and so he was not in as deep a sleep as he might have been otherwise.

Chance was saved from the hailstorm by a stroke of luck.

Chance's hearing brother however, was so tired from lack of sleep that he got quite saturated with moisture  before he realized that mother nature had unleashed herself onto his sleeping bag.

The moral of this story is, sometimes it does not matter if you can hear or not.  Some things just come down to luck. 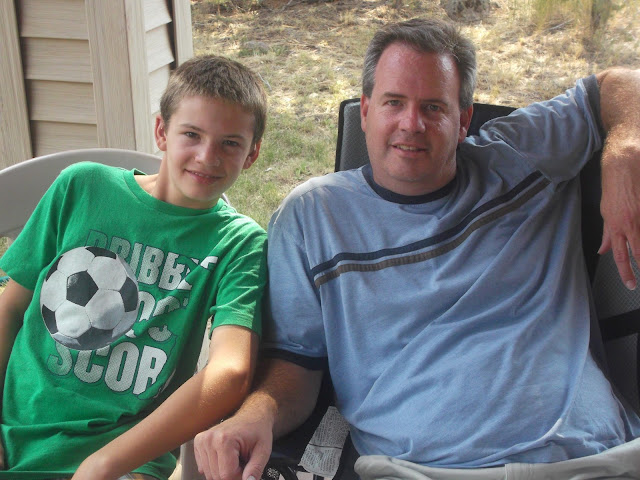 Two highly attractive boys on the wrap around porch. Before the hailstorm got everything all wet.