Ammon has a birthday and falls in love


Ammon is in love.Not with a girl, he still thinks they have cooties.  He had a birthday this week and he chose a blue remote control sports car that he fell in love with.  He was literally beaming as he walked through the store holding his car. So much so, that shoppers kept stopping to talk to him and to tell him what a fantastic car he had.
He chose the car two days before his actual birthday so he had to wait to get it out until he officially turned 11.  His face showed pure bliss as Ammon was reunited with his car after a few days apart.


Ammon absolutely loves fall. I'm sure  that his birthday being this time of year has something to do with it but he also loves Halloween, pumpkins, corn and dressing up.  He tried to get our Halloween and fall decorations out in July. I had to limit him to September 1st before he could drag out pumpkins, witches and strands of leaves.
Ammon is excited about everything.  He loves all holidays and lives to celebrate whatever holiday is on the horizon. He brings a joy and festivity to life that affects all of us in the family.  He was devoted to our corn field and pumpkin patch this year and takes great pride in the huge pumpkins we grew and that now sit on our porch. When we carve pumpkins this week he will be so excited that it will be hard for him to sit still. It should be noted that this is the first year we have managed to grow corn and huge pumpkins. Ammon was a devoted caretaker for the garden and has loved the giant pumpkins since they first sprouted.
Ammon may have suddenly gone deaf a few years ago, with the hearing loss continuing to grow, but he doesn't let that dampen his love for life or hold him back.
Posted by Chance's Mom at 12:18 AM No comments:

Chance and his implant have an accident

This is Chance's implant: 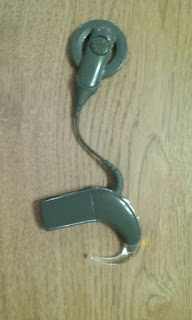 This is the scooter that Chance was driving today: 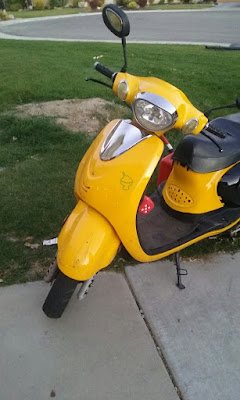 Chance was driving this scooter down the road with earbuds which created a space between his implant and his helmet.  Due to this space, the wind caught hold of one of his implants and blew it off.

The fact that his implant flew off was very distressing to Chance and he started to worry that cars behind him would run it over. With Chance worrying about this, he didn't notice there was gravel where he was pulling over to, which caused the scooter to slide and fall over while moving on the road and Chance jumped off.  In an amazing turn of events, Chance managed to avoid hurting himself and the scooter.

It took Chance a few minutes to realize exactly where his implant was on the road though, and once  he could see it,  he sat with panic rising as cars came dangerously close to running it over.  Chance said a jeep wheel came within 2 inches of hitting his implant.

As Chance was trying to save his implant before it got run over, it is worth noting how well the implant blends into asphalt:

Thankfully, the road Chance was driving on is a road that is populated with cars but also has lulls in traffic.  Chance was able to get to his implant before it got demolished.

I think Chance may hold his implant a little closer tonight.

It never occurred to me that Chance's implant would blend so well into the asphalt.

Chance said since he realized that the ear buds created a space that allowed his implant to fall off, he won't wear them anymore when he drives the scooter.

Chance was wearing a helmet, but I think we need to get a helmet with better coverage for him.

You may wonder how Chance can even hear with earbuds on.  Though other headphones work remarkably better for him, he will sometimes drape earbuds over his ears by his microphones so that he can hear his music if earbuds fit better such as when wearing a scooter helmet.   Chance will not be using earbuds anymore on the scooter however.

I think this will give his implants greater peace of mind that his head is a safe place to ride. `
Posted by Chance's Mom at 8:18 PM No comments: 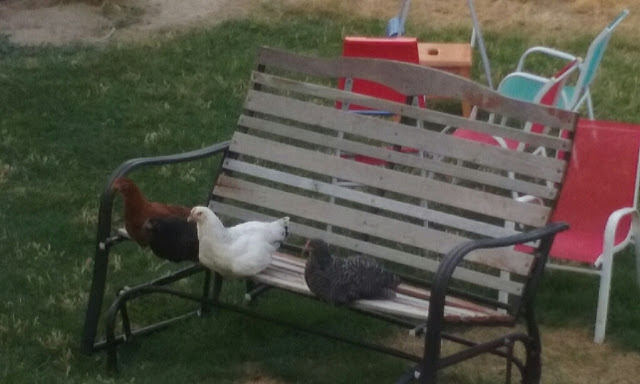 Our family acquired some chickens last spring so that we could have fresh eggs.  When we got the chickens they told us we had about a 10% chance of getting a rooster They try and choose the female ones to give you, but you know how it is with baby animals......sometimes you just don't know what you got until they are a little older.

The chickens are now old enough to be laying eggs.  AND out of the seven chickens we have, two are roosters. Roosters like to crow in the morning and the first morning that happened, my husband and I lay in bed realizing that the rooster going off at 6:15 belonged to us. It was a weekend and we could only imagine what our neighbors were thinking with a rooster going off that early in the morning.  He didn't just go off once to tell everyone it was morning either. He went off over and over again.

My husband and I were quite stressed about the effect our crowing rooster was having on our neighbors. The next morning, he went off again naturally, because that is what roosters do. I was talking with my daughter about how we were probably going to have to get rid of the roosters when Ammon got a little panicky.
"WHY?"  He wanted to know.  It should be noted that that the kids all chose a chicken to call their own when we got them and the crowing rooster is Ammon's.

I tried to be sensitive to his feelings and explain that roosters are loud and that we hadn't planned for roosters.  At this point, Ammon told me matter of factly, " He doesn't crow!"

My daughter and I looked at each other and then back at him.  Of course Ammon doesn't hear the rooster crow. He sleeps quite well through the ruckus and has no worries about how the neighbors may be feeling about a rooster going off at 6:15 in the morning.

We had to really work to convince Ammon that the rooster does indeed crow in the morning.  I think he is still skeptical since he isn't hearing any of the noise. He did come sit by me as I was weeding the yard and said in a tender voice; "There has to be another way to stop the rooster. We can't get rid of him."

I gently explained that roosters are made to crow, that is what they do.

Ammon is an animal lover and he has a tender heart when it comes to animals.  We haven't totally decided what we are going to do with rooster yet.  We have talked to the neighbors that are closest to us and most affected and they all said they don't hear him or they aren't bothered by the crowing. We have also been putting him in the little chicken barn at night and then letting him out later in the morning when it is a more decent hour to crow. You don't hear him as well when he is in the little barn.