Chance has been working on an assignment in history class called "Adopt a grandparent."   The assignment included Chance doing interviews with his chosen grandparent.  Chance has chosen the best grandpa in our area to interview.  He and his wife are like the foundation of our neighborhood.  They plan neighborhood events and my children actually call them grandma and grandpa.

Chance has really gotten to know some things about his adopted grandpa through these interviews.

We were talking while in the car about various things the government is involved in.  I will just end it there.  Just let it be known that the conversation was full of opinions.

Chance chuckled, "Me and grandpa had the best time talking about politics during our last interview!"

Then he paused and said, Wait, politics is like the government and stuff right?"

When I assured him that politics was like the government and stuff, he went on.
"Ya, we talked about a lot of politics because we were talking about patriotism."

It is important that Chance know just what politics are.  He'll spend his whole life being affected by politics.  And talking about politicians. And having opinions about politics. And having that one person he knows who will insist on sharing their opposite opinion with Chance on a regular basis whether he wants them to or not.
Yes, he needs to be aware of just what politics are. I'm glad we clarified the definition.
Posted by Chance's Mom at 7:21 PM No comments:

This past week was spirit week at Chance's school.  That means the kids got to do various activities each day like crazy hair day, crazy leg day (I know, don't ask), and on the last day they put face paint on their faces and sprayed their hair the school colors for an assembly.

Chance went to school benign enough.  He had a few streaks of face paint on with a supply of more to add later before the assembly.

By the time I picked Chance up from school, almost his entire head of hair was sprayed in school colors.  I asked him if his friends helped him.  He said no, a teacher had helped him.  THE teacher that teaches drama and is amazing at costuming and make-up.  She helped to make sure that Chance's efforts at school spirit were not half- hearted.

Chance told me the story about how as his teacher was covering his hair with yellow color, she suddenly kind of shrieked and said, "AH!  CHANCE, I FORGOT ABOUT YOUR IMPLANTS! THEY HAVE SOME SPRAY ON THEM!"

Chance chuckled and said, "Thank goodness I had my soccer covers on my implants.  Those wash off a lot easier."

Later that night,  after I told Chance's dad the story, he replied, "Is that why I saw Chance washing his soccer covers in the sink today?"

Why yes, that is why you saw Chance washing his soccer covers at the sink honey.  They participated in spirit week by doning the appropriate colors:)
Posted by Chance's Mom at 11:42 AM No comments:

Halloween night, we had a little party over here at our house for Chance, his brother and a few of their friends. We have a Japanese exchange student here for the week and a day after landing in the United States, he got to experience Halloween.  There is another family in the neighborhood who has an exchange student as well and he joined us at at the party.

Part of the festivities was a scavenger hunt that I arranged placing items at various houses throughout the neighborhood for the boys to find and bring home.  Then I handed them a map with the proper houses marked with an X.

Chance led one team and his brother the other.  The teams took off into the night and we passed out candy to pint size trick or treaters.  Chance's brother's team won.  They all came in panting and the Japanese exchange students crashed onto the floor leaning against the couch to rest. They had run at break neck speeds through the neighborhood while still adjusting to a different time zone.  They are awesome.  The boys had made good time dashing around the streets near our house to locate the items.

Now the boys had to carve or decorate a pumpkin using the items they collected on the scavenger hunt.  It didn't matter if they carved the pumpkin or just managed to stick stuff onto it, they just had to use all of the items.  I thought it would give the Japanese students an opportunity to decorate a pumpkin.  In the past our exchange students have been rather fascinated with carving pumpkins.  Chance and his team arrived not long after his brother's team.

When the boys sat down with their pumpkins to begin decorating them,  it soon became clear that Chance's team did not have all of the items.  When this was pointed out, Chance exclaimed in exasperation,"I didn't know we had to go to all of the houses!"

I told Chance that I had explained that when all of the boys were sitting in the living room before they left.
Chance looked around a little confused and then said." I didn't hear that! I am deaf you know." Chance likes to know what the plan is, and he felt he didn't have that information in this case.  Chance also rarely brings up his deafness in contexts like this.  There was actually another deaf boy on Chance's team and he didn't realize that they were supposed to go to all of the house's either.

So I loaded up Chance and took him back to the two houses he missed to gather the items.

All the boys ended up carving the pumpkins and then incorporating the items into their design.  The Japanese students pulled the pumpkin guts out with their bare hands.  They worked together with a look of both unbelief and wonder as the seeds and stringy goo never seemed to end. 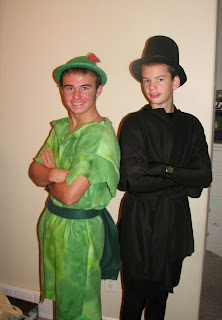 It is worth noting that this year Chance and his brother dressed up as Peter Pan and his Shadow.  Chance was the shadow.  They had a great time hamming this situation up at school as Chance would steal his brother's hat and his brother would chase after him.  Apparently, Peter Pan also tried to sew his shadow on a few times as well.  They kept the student body amused. 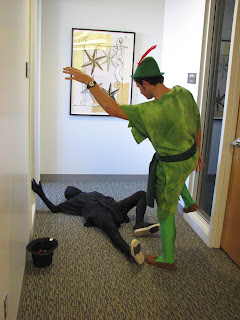 At one point during their dad's trick or treat parade at his work, Chance wrote up an imaginary declaration of independence and handed it to Peter Pan.  His brother refused to accept it and tore the imaginary document into shreds.


Our family always has a theme we dress up like for Halloween.  This year, Chance's youngest brother and sister held heavy sway over our theme.  They chose Peter Pan.  So, Chance was Peter Pan's Shadow, his brother was Peter Pan,  his sister was  pirate, his brother was Captain Hook and his littlest sister was Wendy.  She wanted to be little Wendy and me to be big Wendy.  So we were both Wendy with matching blue dresses and bows in our hair.  Chance's dad was Mr. Smee.  A pointed request from Chance's little sister...she wanted her dad to be Mr. Smee.  It worked out quite well and everyone looked great.  I think Chance's little sister pulled off being Wendy better than I did, but one really can't compete with someone who is that cute.
Posted by Chance's Mom at 9:06 PM No comments: