Chance is now in England.
Ironically, he has been getting less rain than we have since he got there.
We have been having rainy day after rainy day.

Chance has been eating new foods and riding horses.
Okay, riding horses might be a stretch,
but Chance managed to get in his horse/cowboy fix
for at least one minute anyway. 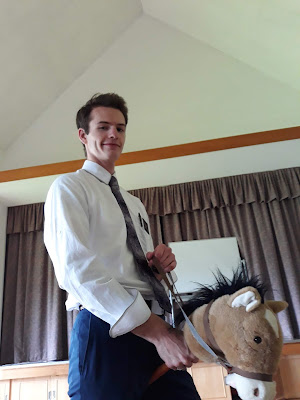 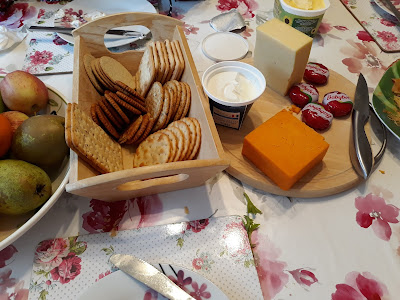 Here's an excerpt from a recent letter:

The thing with the horse. I was at the chapel this past week and we went into the gym just to do some language study and when we walked in, I noticed one of those stick horses that you put between your legs and I got it, and "rode" the horse around the gym. It was pretty epic if I do say so myself! And don't you worry, I have a picture of me riding the horse! (Dont worry I didn't actually break any rules, in the Missionary handbook, it says that you're not allowed to ride horses so I "rode a horse.")

Spiritual thought for the week. I was really studying the 2000 strippling warriors and their courage and the strength they had this past week to give Myself strength and courage as I am a missionary for the next two years in England.

Alma 57: 21, 25-27
21 Yea, and they did obey and observe to perform every word of command with exactness; yea, and even according to their faith it was done unto them; and I did remember the words which they said unto me that their mothers had taught them.

25 And it came to pass that there were two hundred, out of my two thousand and sixty, who had fainted because of the loss of blood; nevertheless, according to the goodness of God, and to our great astonishment, and also the joy of our whole army, there was not one soul of them who did perish; yea, and neither was there one soul among them who had not received many wounds.
26 And now, their preservation was astonishing to our whole army, yea, that they should be spared while there was a thousand of our brethren who were slain. And we do justly ascribe it to the miraculous power of God, because of their exceeding faith in that which they had been taught to believe—that there was a just God, and whosoever did not doubt, that they should be preserved by his marvelous power.
27 Now this was the faith of these of whom I have spoken; they are young, and their minds are firm, and they do put their trust in God continually.

The stippling warriors were delivered from death and were delivered by the hand of God because of their faith, their obedience, and their desire to obey God and follow him. As we continue to do the same thing, God will preserve and will protect us as we go through hard times and struggle through life. He does not leave us comfortless. He is the light and the way and as we seek him, we will feel his peace and love and he will help buoy us up in our hardships and trials.

I love you all and I hope you have a fantastic week!

https://www.lds.org/scriptures/bofm?lang=eng
Link to The Book of Mormon that Chance referenced.
Posted by Chance's Mom at 11:24 AM No comments:

CHANCE HAS ARRIVED!
He is officially in England. I am a bit behind in writing, but Chance arrived in England
about two weeks ago.

Chance arrived, but his luggage did not.  Chance had a few lay overs, and
apparently, his luggage got left behind somewhere.

He had a layover in The Netherlands for about an hour which was wonderful
because he took pictures out of the plane window and I was
able to see the land where I served my mission.
I still love that place and it's people.

Losing luggage while traveling can be a bit of a nightmare, and Chance
ended up having to borrow some of his companions pants for a service project.  I
imagine those pants were a bit short on him since Chance is
taller than his companion, but there was an upside in this drama for this momma.

One of my first thoughts after finding out that the luggage would be sent to the
mission home when it arrived in England, so Chance would eventually
have access to his stuff, was that Chance did it!

Chance lost his luggage while traveling to another country, was able to talk to the
airline and figure out what had happened and then figure out
what to do.

This does my heart good because as a momma, you want your kids to be
able to be independent and figure things out.
And Chance was able to do this while understanding the accents of England.

I had to ask for directions in Boston once when we were lost, and the police officer's
accent was so thick, that when I got back in the car, I told'the driver
I was mostly certain that I had heard everything right.

When you have a deaf child that you try to raise to be independent and able to go
out into the world and be able to take care of business,
this is a triumphant moment.

Chance has now received his luggage so he no longer has to wear
his companions pants when doing service projects.

Chance actually packed in such a way that he could live out of his carry on for about a week
just in case something like a loss of luggage happened.

He just didn't pack jeans for service projects in that carry on.

Here is a snippet from Chance's weekly emails home:

England is a different place y'all! It's not the same as America and Utah that's for sure.
My first day which also happened to be my birthday was zone conference and it was good but I fell asleep so many times haha.
Not too much has happened but we have been able to teach a Chinese college girl yesterday and she is so prepared for the gospel. I was able to translate the English into Chinese for her because we had an English member present.
Spiritual thought of the week:
8 Blessed be the name of our God; let us sing to his praise, yea, let us give thanks to his holy name, for he doth work righteousness forever.
I love this because it is focusing everything that we do on God and thanking God for everything that we have for the many blessings that we're so blessed to have.
Sorry it was kind of short but I love you all and will talk to you next week!
Quote of the week:
"I don't Rob banks, I mean, I can't."
This is a funny story, so we saw this guy that was on a wheel chair with a leg half Missing ahead of us coming towards us as we were walking and when he got close to us he started talking. He talked about a lot of weird things and we could hardly understand him because he only had one tooth. Well he started asking us about Donald Trump and then he started talking about robbing banks. Well he then said "I don't Rob banks, I mean, I can't." My mission companion and I had a good laugh about that and then questioned if he would if he could.

Chance and His Critters


It is Chance's new buddy.


Chance found a new critter to enjoy in the MTC this week.
Yearning for critters seems to be a common thread in Chance's life at the MTC.
I am glad that he has the bounty of the earth to help supply him
with critters to love.

I wonder what new critters he will find and bond to in England?
When I served a mission in The Netherlands, my
critters of choice were the little quarter sized frogs. Just seeing one of those on the path
as I rode my bike across the countryside brought joy to my soul.
I wonder if Chance will find frogs in England?
Until he gets there and sees with his own eyes,
I guess he'll settle for bonding with spiders at the MTC.

Here is an excerpt from Chance's weekly email home:

For clarification, this scripture he quotes comes from The Book of Mormon Another Testament of Jesus Christ, in the book of first Nephi chapter 17 verses 13-14.

1 Nephi 17:13-14
13 And I will also be your light in the wilderness; and I will prepare the way before you, if it so be that ye shall keep my commandments; wherefore, inasmuch as ye shall keep my commandments ye shall be led towards the promised land; and ye shall know that it is by me that ye are led.
14 Yea, and the Lord said also that: After ye have arrived in the promised land, ye shall know that I, the Lord, am God; and that I,the Lord, did deliver you from destruction; yea, that I did bring you out of the land of Jerusalem.
When we are having our hard times in life, and are wondering why we are going through our trials, remember that the Lord is with you. And he is alongside you preparing the way for you to overcome your hard times. Through our trials, we will come to learn of God, and learn of his mercy. For it is through our hard times, that we are able to see the true mercies of God and how his hand influences our lives. I promise that as you look to our Lord and Savior, and recognize how much he can help you and seek that help, that he will help you and will be there always.
I love you all! Thanks for all of y'alls support! I will talk to you next week!