Summer - tis the season for long sunny days, swimming pools and family reunions.  We attended our licorice family reunion yesterday.  No one is named licorice, but as a family going back several generations, perhaps since the beginning of time, we all love licorice.  Especially black licorice.  It is in the genes.  As a manifestation of this fact, a large basket of licorice was placed on a table near the pavilion where the reunion was held and family members were able to eat at will.  There was lots of licorice in that basket, and by the end of the evening, the basket was empty. The black licorice went first of course.

Along with a love for licorice, the family loves to use the giant hill near my aunts house as a slip and slide. My aunt and uncle have access to a giant piece of plastic that they lay out down the hill.  The result is sheer bliss.  You get to ride down forever and then you hike up the hill so you can do it all again. 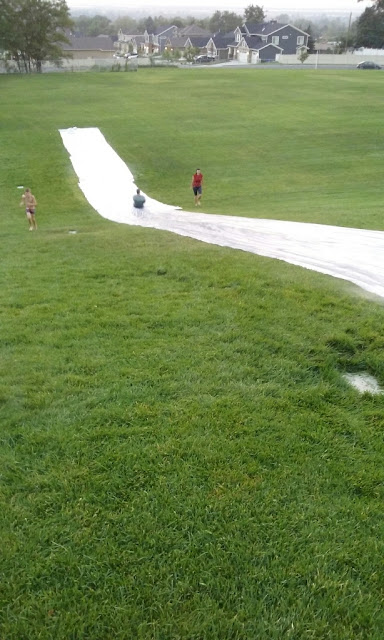 After  eating a picnic lunch and getting wet on the slide for a while,  the adults and several children gathered in the pavilion to hear family stories about my grandma and her siblings.  Most of them have died now, but their spirits are still strong and live on through the rest of us. I love to hear the stories about relatives and how they are just like us.  One aunt told the story of my great grandmother and how she liked to play jokes.  She lived well into her 90's so I remember her and went to her house several times while I was growing up.  She had the best toys and games for kids to play, things we didn't see anywhere else, and my cousins and I had a grand time playing in her backyard.

As everyone gathered to hear the stories, the kids would go back and forth from the pavilion to the water slide.  Ammon would come and sit next to me and listen to the stories and then head down the water slide.  He would take off his hearing aid and implant, hand them to me to hold, go down the slide, come back and listen again for a while and then go back to the slide.

At some point, Ammon got upset at his sister and came running over to the pavilion.  Ammon is not quiet when he doesn't have his devices on and as I saw him running towards me, I could tell he was upset.  I knew right at that moment, that he was going to run over to me, tell me why he was upset, and that every relative listening to the stories would hear what he had to say.  I got up to meet him so that we were a ways off from the pavilion when he expressed his thoughts to me.  He was mad at his sister, and in typical Ammon style, he was quite loud as he told me the details. Ammon does not seem to be bothered by the presence of other people when he is expressing himself when upset. He doesn't always respond to the "evil eye" either which is the look every mother gives when she is non-verbally telling her offspring to be quiet.  I was glad that I met Ammon a bit away from the pavilion so he didn't interrupt the story telling. Ammon also can't fully hear my responses when he doesn't have devices on. Chance can read my lips but Ammon has not mastered that yet. 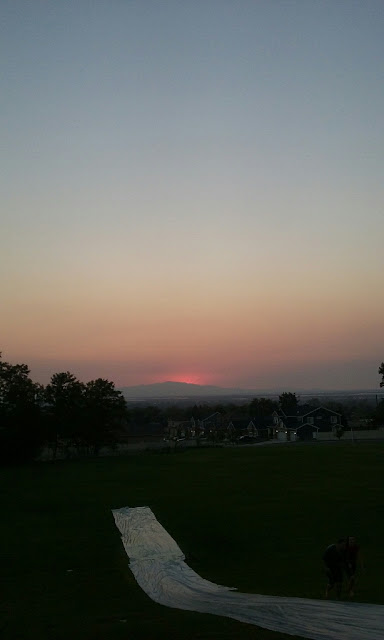 We had a lovely time at the reunion and we also got to explain some things about implants and deafness to extended family. Our boys are the only deaf children on either side of the family.  A few of the more senior relatives on both sides have hearing aids, but that is a different ball game with different causes.

This week Ammon's grandpa took him and some of his cousins to an amusement park.  It has become a yearly tradition, this visit to the amusement park.  My dad took me and my siblings each summer when we were growing up, and now as a grandfather, he takes the grand kids.

I went along to help corral little bodies this time and I think I can speak for all of us when I say that we all had a great time.

The amusement park has all sorts of rides ranging from a massive ferris wheel that takes you up way above the trees where you can look across the entire valley, to a roller coaster called Cannibal.  Cannibal as you can imagine is not for the faint of heart.  As you approach the ride there are signs all along the path that say that cannibal will eat your cell phone, wallet, sunglasses and anything else in your pocket.  In fact, you are required to leave any items in your possession in lockers off to the side of the ride before you board.


The list of things cannibal would eat did not specifically include cochlear implants and hearing aids, but employing my skills of deduction, I figured hearing devices may be in danger on this ride.  Luckily, grandpa had already taken cannibal for a ride earlier in the summer so he was willing to be "the holder" of all items the rest of us needed to have secured. This included Ammon's implant and hearing aid.  This of course meant that Ammon could not hear anything once we got in line.  I felt kind of bad about that as he missed out on conversations happening with cousins, but unlike Chance, Ammon can actually hear some things with out his hearing devices.  It is hard to know exactly what he hears, but he can hear if you are real close to him in the ear that takes a hearing aid.

On one hand, not being able to hear everything worked in Ammon's favor because his cousin and sister started expressing their reservations about the cannibal ride.  I was sitting in the middle with Ammon and Ammon's cousin and sister were on the ends.  The lap bar had just come down and locked us down so tight that we could barely feel our legs, when Ammon's cousin who is his age said:
"Why am I on this ride again?  Why did I do this? Okay, okay, I think I can do this, yes I think I can do this again."

"Mom, I don't know that being on the outside is safe here at the front of the car.  You should have switched me spots."

Nothing like a boost of assurance as one gets ready to embark on a ride for the first time as Ammon and I were doing.

The ride moved from the loading dock, to a sort of elevator shaft, where the car was taken up several stories and then deposited on a track high above the parking lot.  From there, the car shifts forward and a door comes down blocking the way from where you just came. You find yourself looking out across the valley high above the rest of the world for just a moment before your car turns and plunges down a long winding track at great speeds.  Ammon and I were holding hands when we went up the elevator shaft.  As we began our decent downward on the twisted track, I figured maybe we should hold onto the rails in front of us instead.

It was a spectacular ride with loop the loops where you found yourself hanging upside down and a stretch where you went through little arch's of water.

We all lived. After experiencing the Cannibal, I am thinking that taking off the implant and hearing aid was the right decision.  That would have been a loooooooong fall down to the parking lot below and I don't know that we could have resuscitated hearing devices that had experienced such an adventurous fall.

Our family trip this summer was a visit to central California.  We have seen southern California a few times, but this was the first time for many of us in the family to see the middle part of the state.  The beaches are more rocky, and the temperature is much cooler than Southern California.  I was continually surprised at how cool it was considering it was the middle of July.
The coast had a rugged beauty and we had a fun time exploring some of the tide pools,
meeting some intriguing creatures and watching as the tide moved in. 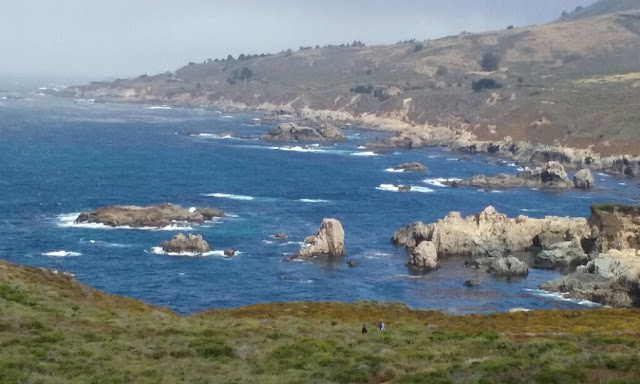 Chance actually met some students studying here in the United States from China.  One of the girls shared the same name as Chance so she wanted to get a picture with him.  Chance got a moment to practice a bit of his Mandarin too.

We all took a turn holding these little starfish.  They were beautiful.

We went on a family vacation to central California this month.  We drove, which  meant Chance and his siblings had lots of time to bond in the car.  The kids got along really well for the most part, there were a few spats over who got to sit where as there are some coveted seats that all the kids want to sit in.  The middle seats in the van are the most popular spots to sit.  Now that Chance can drive though, his first preference is taking a turn behind the wheel.

We were able to experience many lovely things while on vacation and had a wonderful time being together as a family.  One of the highlights of our trip was when we found a little swimming hole among the giant redwood trees.   The water was cold, but since it was hot outside, it made a great place to swim and play. There was a rope tied onto a tree at the edge of the river and the kids loved swinging out and letting go so they could land in the water.


Chance and his brother decided they should climb a redwood tree.  We heard Chance's voice from somewhere heaven word say: "It is really really high up here!"