Chance is 17. Since that is the case, there are certain things that Chance spends time and money on. One is the truck we let him use as his own. It is like 100 years old, but he loves that thing like it is a person.  When Chance goes out with friends, many times he volunteers to drive. His friends have newer cars, but Chance has his bestie the truck and prefers to be with it whenever he can.

Then there are of course girls. Chance has a great group of friends and they have employed some darling ideas for date dances. The next one coming up, is the sweater swing in December. Chance, his date and another other couple will go to a a neighboring thrift store where the girls will pick out sweaters for the boys to wear to the dance, and the boys will pick out sweaters for the girls to wear. This should make for interesting wardrobe choices.

The third thing that Chance spends a lot of time thinking about are headphones. He has been on the hunt for a good pair that works for him while he is at work. He has tried all of the headphones we have at home, and they have worked but not well.  Granted, we don't usually spend oodles of money on our headphones here.  We like headphones, and we like music, but investing in expensive headphones has just not been something that we have done.

Well today, Chance found his headphone soulmate. They work well with his implants, he can dial the base setting on the back and the sound that comes through is literally music to his bionic ears. These headphone usually cost about $200.00, but it was a return so he got them for $50.00. He says it was more than worth it. They are the Skullcandy Crusher wireless headphones. Apparently, we could all use some to make us smile. That is what Chance has been doing since he got home with them.

The only downside to these headphones that I can see, is that we may never be able to talk to Chance again since he is walking around the house listening to music and can't hear a thing we are saying.

Sending Our Deaf Kids Into the Woods

We drove up into the mountains to chop down our Christmas tree this past weekend. It may seem a bit early for that sort of thing, but we realized that someone in the family is busy for the next several weekends, so rather than risk not being able to go up together, we headed up on Saturday.

We didn't head to our regular spot that we usually go to. We decided to try a new area. It was beautiful. Mountain air, green pines stretching up on either side and family. It was a good mix.
The weather was not very cold and hiking through the trees we found a little bit of snow, but not too much, which is good because one of the kids forgot their snow boots.

Since we were new to the area, and we had to cut down a tree that was at least 200 feet off of the road, we decided that we should send Chance up ahead to scout out the trees and see if the kind we needed was present. There is one kind of tree that we are allowed to cut down, so we have to ensure that we know what we are getting. It is a sub alpine fir and it is mixed in with other kinds of trees across the mountain. 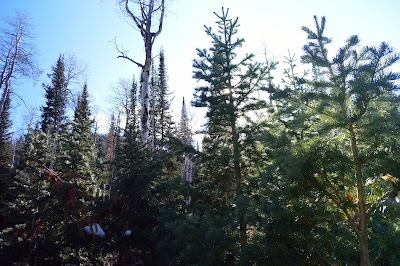 After we pulled off and parked the car, we pulled on our coats, gloves and boots. Chance and Ammon headed off and disappeared into the tree line where they quickly disappeared from view. It was at that moment that we realized that we had just sent our two deafies into the mountains and that it may be hard for them to hear us when we called. A bit funny how you think about these things after the fact.
Thankfully, Ammon found animal tracks and started yelling excitedly so we knew right where the two of them were and could hike up to them.

Chance brought his hatchet that he got at the mountain man rendezvous this past summer, and between that and the saw, getting our tree was fairly easy. We all took turns and Chance got to finish the job with his hatchet and call timber. 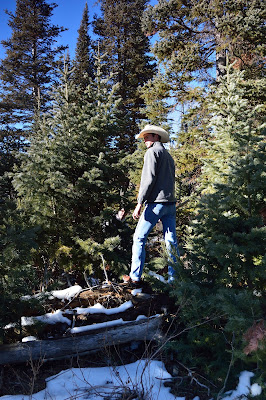 So now, our Christmas tree is sitting in our garage in a bucket of water. It needs to acclimate for a few days. Sometimes we have been a bit late in getting our Christmas tree up. Not this year! We'll have our tree up and ready by Thanksgiving.

Thankfully those mountain trees last for two months inside. 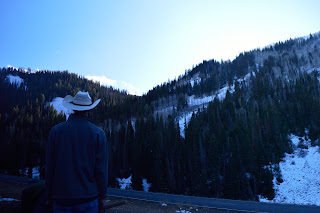 Chance and I participated in a panel this past week. First we presented our journey with deafness, diagnosis, and what mode of communication we chose. The audience was made up of students studying in fields related to working with deaf children. Audiologist speech therapists etc.  Several colleges listened in to the proceedings via technology. There were three other parents on the panel and each of us told our story. I have been presenting at this annual conference for years, but this is the first time that Chance participated. 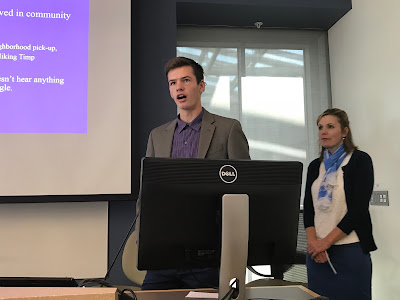 Chance brought an invaluable insight into the meeting as he could talk about what the process was like as someone who is deaf. I presented the first part of our journey, Chance's diagnosis, the story of trying to Chance what he needed with a late diagnosis, and my thoughts and feelings.
Chance presented after me and he talked about where he is now in life, how he felt about his deafness in school and how he feels about implants.
After all of the panel members presented their stories, the students could ask us questions.  The students wanted to know why we chose the communication option that we did, and what the hardest thing about the journey has been.
We chose hearing aids and cochlear implants for Chance because he made it clear that he wanted to talk. We all started learning sign language early on, but Chance never used sign language as his main form of communication. He used sign to supplement what he was saying sometimes, but the main way he tried to communicate with us was through talking. That doesn't mean that everything always went smoothly. We had  some struggles as Chance learned to talk and communicate. It has been so worth it though.
One of the students asked Chance how he was able to learn Mandarin with implants as her understanding is that it is a very tonal language.
Chance said that he applied the same principles that he had when he was learning to speak English. He said that in English you have to listen to the tones of people's voices to help know what they are saying. For example if people are asking a question their voices go up at the end. Chance really had to pay attention to things like this when he was behind in language and was literally learning how to listen.
Who knew the skills he developed when he was  focusing extra hard on learning English would later be the same skills that would help him learn Mandarin?
I remember how Chance would lift his voice at the end of a question when he was asking us something. Sometimes it was the only way we knew he was asking a question because we didn't understand all of his words. We knew he was asking a question by the way his voice went up at the end, but we didn't know what we were answering.
After the presentation, Chance told me that this was the first time he had been able to effectively put into words how he learned how to speak Mandarin and explain the process to someone.
Talking to the students and answering their questions is always a fun experience for me, It is nice to be able to talk about the experiences that families are having as they try to get the services they need for their deaf and hard of hearing children with people who will be working with the families. Chance enjoyed being able to share his journey and answer questions that people have as well. And who better to answer questions and talk about what it is like growing up deaf than a deaf teenager?

Ammon started horse back riding lessons a few weeks ago.  When we get to the barn where he rides horses, the first thing he does is round up the horse he is going to ride out in the field. He puts the bridle on, leads the horse into the barn, brushes him down and then puts on the saddle.

Since Ammon got to pick which horse he wanted to ride the first day he had lessons, he choose a big white one named Jack. 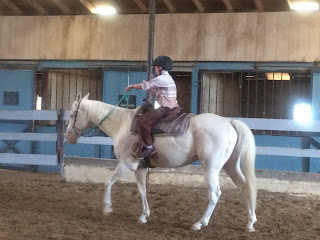 One of the requirements of the barn where Ammon has lessons, is that kids under 18 where a helmet while they ride horses.  As we looked at helmets to buy for Ammon,  we were lucky to find one that
sat on his head just right so that it doesn't bother his implant or hearing aid. His sister's helmet comes down further than Ammon's and is shaped a little differently and I think that one would have caused some trouble with the hearing devices. Ammon's helmet cost a bit more than his sister's did, but it was well worth it. He LOVES riding lessons.  The horse he rides is a BIG horse and that makes Ammon work a little to get into the saddle.
Fall is a beautiful time of year for horse riding lessons. The weather is not too warm or too cold, the sky is blue and there are colored trees all around with crunchy leaves.
Posted by Chance's Mom at 10:42 PM No comments: