It helps if you are known as "The Beast"

Though Chance has navigated his implant failure with his usual perseverance, and the situation is being effectively taken care of,  he struggled at the beginning of the school year.

It was Chance's first year at this school and everything was new.  The kids, the teachers, the schedule, the curriculum and expectations.

This is not a pleasant situation to try to navigate when your hearing is failing.  I think Chance felt extra vulnerable at a time when he had a lot of changes to adjust to.

Chance is a perfectionist and it is very important to him to do things right and well.  Not being able to hear like usual made the situation harder to adjust to and Chance really struggled for a time.  I don't know that Chance identified his hearing loss as a cause to his anxiety, but I know my Chance.

He was concerned about not hearing what the teacher was saying.  He struggled with meeting the new kids he encountered as it was difficult for him to hear what they were saying sometimes.  Indeed, I witnessed several times in the halls of school and in the lunchroom  when kids would say,"Hi Chance!", and Chance would have no idea that he was being addressed.  I don't think Chance realized how many kids were reaching out to friendship him.

For the first several weeks Chance suffered with some serious anxiety at school.  The women in the special ed department were so good at helping him feel welcome and making arrangements for him to test in their office if he needed a quiet environment.

We talked at home about taking deep breaths and helping ourselves calm down when we started to feel anxious.

Chance was well accepted at school and the teachers told us how much they enjoyed having him in class and what a great student he was.  The special ed department and the teachers also worked to make sure that Chance was seated where he could hear in the classroom and  some teachers noticed that he wanted a clear line of sight their mouths so that he could lip read if he needed to.  Chance is a pro at lip reading.

I know that there are several deaf children and adults who have only one implant.  The fact is, that second implant really makes a difference in how well you can hear and to have the ability taken away for whatever reason, is unnerving.

I hear perfectly well out of both hears (give and take:) and I go crazy when one of my ears gets plugged up.  It is distracting and I have to focus harder on what is being said and ask more questions of my kids and others when they talk to me to ensure I heard them right.

I can only imagine what it was like for Chance to loose half of his hearing.  And he lost more than I ever loose with a clogged ear.

Things are now going well for Chance.  There is a little bit of adjustment for Chance with this new implant even though Chance has had two implants for years.  Each time you get an implant is a little different I think.  Chance is hearing well and his anxiety has all but left.  I don't get texts anymore telling me that he is having a hard time and he happily leaves the house for school each morning.

There are some things he is working on to fine tune his hearing with his new implant. Chance meets with a consultant from the School for the Deaf once a week.  We love you Nancy! And Chance has had some funny incidents at church etc. when there are lots of crazy boys his age being loud and Chance has not been able to hear exactly what is being said.  He takes it in stride and even chuckles about it.

Chance has been nicknamed "The Beast" in futsal. Being known as The Beast can only help in any situation, since it just sounds like you have everything under control. During last period each day, Chance takes a bus off campus with his team to an indoor soccer field.  He gets to kick a ball around for close to an hour. That makes it all right in his world.

Just call him The Beast.

Sing on my son, sing on! 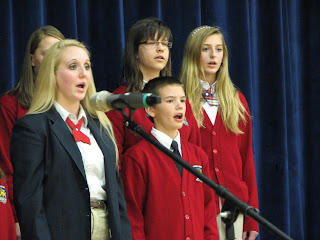 So far in my career of being a mother, I have managed to override the discenting voices at school that tell my boys that real men don't sing in the choir.

I am happy to report that both of my boys not only sing in the school choir, but in our church choir as well. The boys are in different choirs at school due to their ages, but that just adds to the volume of music we get to enjoy around the house.

Before his recent concert, Chance asked me if I was familiar with the Beach Boys as they would be singing some of their songs.  I assured him that I was and he was truly amazed to learn that this group has been around for decades.

Both boys benefit from learning to sing and read music etc.  And it really helps Chance to have music in his life and to learn to hear the difference in notes, and to learn to match his voice to the notes.  He has learned so much about how music works and that only helps him to enjoy music all the more with his implants.

Chance just had his first choir concert of the year and as the kids marched into the audiotorium to perform, all dressed to the nines and looking professional, I counted the boy to girl ratio.

I would dare say that this choir needs Chance as much as Chance needs this choir.

Chance enjoys singing and is dedicated to learning the songs even though it often takes him longer to learn the subtle differences in pitch etc.  I am so proud of him.

Chance and his group gave an entertaining performance and I look forward to seeing more of them through out the year.

In a few weeks, we will gather back at the school to see Chance and his brother perform the songs for "Les Miserables."

It is good to have a little culture in our lives.