We headed up into the mountains to cut down our Christmas tree again this year.  We were dressed in snow bibs, coats and gloves, but it was one of the warmest years we've had when collecting our tree.
Chance's brother had hurt his foot so he wasn't up to hiking a long way into the wilderness so we were looking for a tree that was lower rather than higher up in the hills.

Luckily for us, we found several trees to chose from that were just a short distance off of the road. As usual, once we started looking the trees over, some had sides that were a bit bare of branches, and others had another tree growing right next to them which made the branches look fuller than they actually were. Like we always do, we eventually found a tree we all loved and hauled it down to the van.

We all take a turn sawing into the tree to cut it down and this year was no different.  While Chance was sawing down at the bottom of the tree, a cascade of snow started landing on him from the branches that were higher up.  He was flicking his head to try and avoid being drenched in snow. I thought I was recording the moment, but it turns out that when my daughter handed me the phone, she had turned off recording. So, we have no record except for our own memories. And this picture: 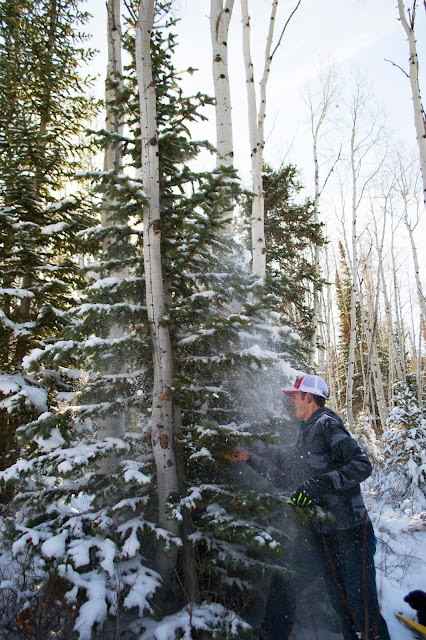 Thank goodness he had that hat.

Being tall helps you when playing the game twister. 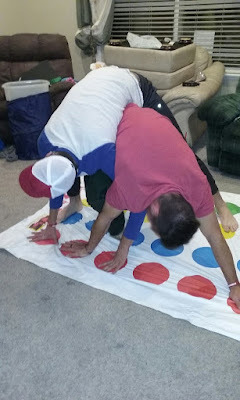 This is Chance and his brother playing the game Twister. We had a family game night and Chance and his brother played against each other. This is a time when Chance's height is a definate advantage because he can just bend over other people to put his hands or feet on the colored spots where the dial says they need to go.
Twister is a game where you spin a dial and it tells you which color circle to put your hand or foot on. It starts out easy enough, but as the game continues, you end up getting all twisted up. Eventually one of the players can't do what the spin dial tells them to do without falling over. The winner is the one who manages to put their hands and feet on the circles the dial tells them to without falling over.
Chance had a great time playing this game with his brother. His brother won though, because Chance ended up falling over.
Better luck next time Chance!
Posted by Chance's Mom at 12:57 AM No comments:

Chance has a loud whisper

Chance was casually telling me today that one of his friends in physics class tells him regularly that he has a loud whisper.

Chance sits up at the front of the classroom and he and his friend sometimes have things they want to say to each other while class is in session. The problem is, Chance apparently has a loud whisper.  His friend is nervous that they are going to get caught talking so she will tell Chance that he is whispering really loud.

Chance said he doesn't feel like he is whispering loud, although two more friends on the row behind him can apparently hear what he is saying when he whispers.

The second problem Chance faces with his attempts to whisper, is that most of the time, he can't hear what his friend is whispering back because she is trying to be quiet enough to not get caught by the teacher.

Chance says it is actually a miracle that they haven't gotten into more trouble for talking in class since his friend regularly tells him he is whispering loudly.

I have found that both Chance and Ammon are difficult to whisper to with when you are trying to be discrete.  They just don't hear you until you are louder than you feel you want to be when whispering. If you are in church or in class where you want to whisper and not draw attention to yourself, whispering with Chance or Ammon is challenging. Chance can catch on to what you are saying with his superb lip reading skills many times.  Ammon has not developed that skill like Chance has.
I don't know why lip reading isn't helping Chance with his whispering problem in class. Maybe his friend isn't facing his direction.

It's Halloween Once Again!

This year we got to carve the giant pumpkins that we grew in our garden this summer. Chance takes his carving seriously and this year he decided to carve the Chinese symbol for devil into his pumpkin. Little Devil is Chance's Chinese name. 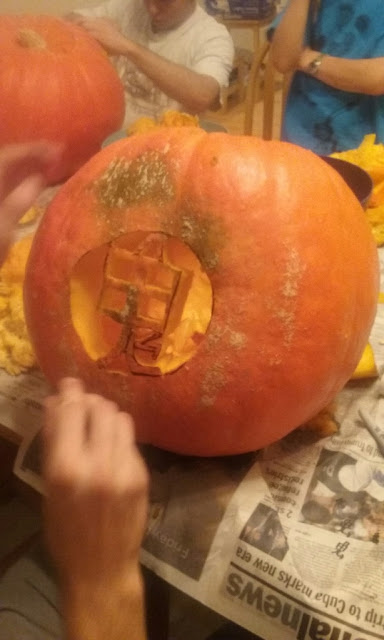 Chance and I carved the pumpkin together. Okay, so Chance looked up the symbol, drew it on the pumpkin, and then carved most of it, BUT, I did help with one section of the carving. 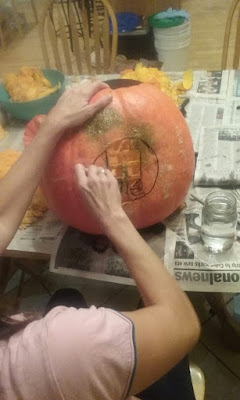 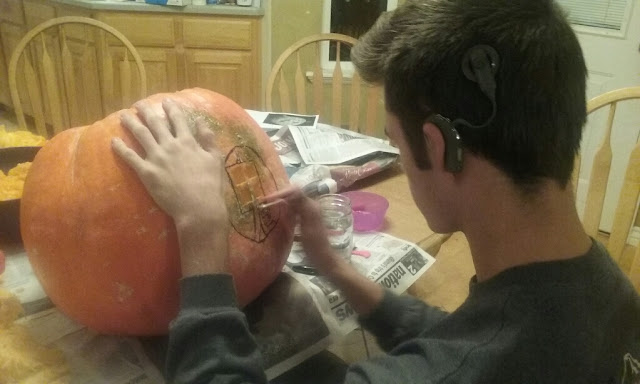 Chance and his sibling have been looking forward to carving these pumpkins for a few weeks now. We had a night where the temperature dipped to freezing so we picked all of the pumpkins so they wouldn't get frozen. Since we picked them, the pumpkins have been hanging out on our front porch helping to create a festive fall mood.
Halloween night found Chance and Ammon trick or treating with their siblings and friends. Ammon went out for a while and then wanted to come home when he got a bit cold and watch a Harry Potter movie.
We are so proud of ourselves for growing such big pumpkins this year. We have never had such a fine crop of pumpkins. We had big ones and little ones and medium sized ones........we are all crossing our fingers and hoping that we can grow big pumpkins successfully again next year. I really think it was the bunny poop. That stuff is great fertilizer. 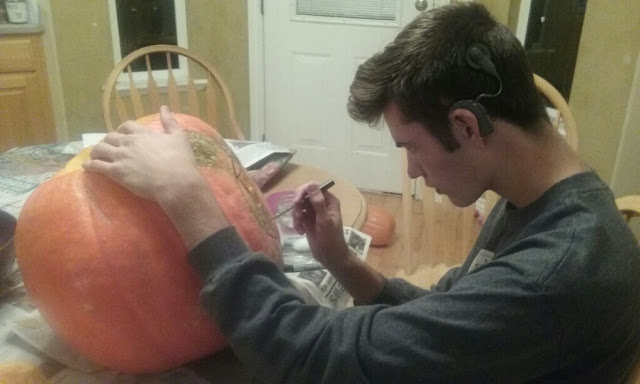