It turns out that Chance's good friend who hurt his knee, didn't really hurt his knee.  He took a family trip to China and missed April Fool's Day, so he decided to play a trick when he got back.  He came to school using crutches and everything. Chance was not at school though, so he did not know any of this.

Chance decided to play a joke on his friend who he thought had a hurt his knee and sent a text telling him that the doctor had said Chance's leg would have to be amputated from above the knee.  Chance's friend never texted back, so Chance did not have an opportunity to respond that he was kidding,

When I checked Chance into school the next day, his first class was history which just happens to have his friend who didn't respond to the text in it and is taught by one of Chance's soccer coaches.

Chance said that when he walked into class, a little late as he was hobbling around the school on crutches, he said his teacher/coach looked like she was in pain when she saw him.

His teacher along with a few other people, thought that Chance was going to loose his leg.

Chance felt bad.  He had never meant for the text to spread.(there is a lesson in this situation somewhere).

After everything was cleared up and everyone understood that Chance's friend had never really hurt his knee at all, and Chance was not going to need an amputation, the soccer coach/history teacher had a talk with the soccer team.

She explained that April Fool's Day was on April 1st and did not last for the entire month.  She then told the team that they could trick on the official holiday for fooling people, but that was it.

That poor teacher.  She just loves Chance and spent an entire day and a half thinking that he was going to loose his leg.  She was also his teacher when his implant failed and she was thinking that poor Chance had been asked to endure many physical challenges in this life.

Chance is fine.  His friend is fine.  The teacher is fine now.  I think the moral of this story is, you never know how far and wide a text you send will travel, so keep that in mind when you press the send button:)

This past week was spring break and Chance had a really good time not going to school and hanging out with cousins.

He also started to learn some new long boarding tricks.  Just as he was in the middle of doing that, he fell and whammed his  knee.  Really hard.  His knee had a nice big raspberry wound on the side and was a little swollen.  We put a band-aid on it and Chance left with his cousins to make his own long board since his cousins work for a guy that makes them.

When I picked Chance up several hours later, he was grinning from ear to ear holding up his own custom made long board.  While still smiling, Chance said,"Hey mom!  Check at my knee!"

His knee was HUGE.

Chance's uncle is a physicians assistant so he felt around the knee and wrapped it in an ace bandage telling Chance to ice it.  Then we left for our 10 hour drive home.

This morning, two days later, Chance's knee was still huge so I took him in to see the doctor.  On the way to the doctor's office, Chance informed me that he really hates needles and would rather ride a shark than get poked with a needle.  I wonder how he really feels.

Once the doctor took a look at Chance's knee, he told us that Chance's knee was filled with a lot of blood and gave us two options:  keep a wrap on the knee, ice it regularly and let his body absorb the blood,  OR he could poke a needle into Chance's knee and drain out the blood. 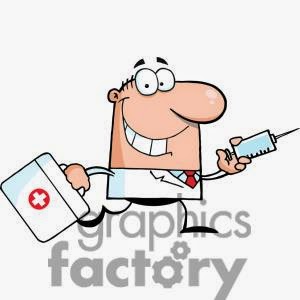 The doctor thought this was the best option as well, and he proceeded to pull out a HUGE needle.  Chance looked concerned.  The doctor told him that he would numb the skin first and that would feel like a bumble bee sting.  Chance sighed and lay down on the exam table and started to play a game on an iPod to distract himself.

The doctor told him not to move, that was very important, but that if things started to hurt, Chance could call out and he would adjust  things.

Some of Chance's siblings were with us, and it took a moment for me to convince them that they could not look on at the proceedings with  looks of horror on their faces with their hands over their mouths like they were doing when the process started.  We all had to be strong for Chance.

I stood with my hand on Chance's shoulder for moral support and distracted the other kids with games of tic tac toe.

Things did hurt, and Chance told the doctor twice that he was feeling pain in his knee. After only a few minutes, Chance's knee was visibly smaller and the HUGE vile attached to the needle was full of Chance's blood.  At this point, Chance was calm and started asking questions about what would be done with his blood now. The doctor gave him a brief explanation and sent us home.  He said that if Chance's knee filled with blood again tomorrow, we would need to check for other issues.  Chance was instructed to elevate his knee, ice it several times today, and stay off of it.  That meant he would not be going back to school.  Chance took that news quite well.  He will be resting his knee tomorrow as well.

This afternoon, we got a call from the doctor's office.  When the doctor sat down later in the day to finish the notes on Chance's file, he started to feel that it would be a good idea to get an x-ray since so much blood had been taken out of the knee to check for other problems.

The x-ray came back and things looked good.  Chance and I looked at the x-ray with the doctor and he pointed out that the knee looked normal with no fractures etc. The doctor pointed out  Chance's growth plates and said that he would be getting taller.  Chance was delighted to hear this news.  He is already getting tall, but taller is even better.

Luckily for Chance, I emailed all of his teachers so his brother could pick up all assignments and homework he was missing:)

As far as soccer goes, the soccer coach at school is having a challenging week.  Chance's position on the team is left wing and his good friend plays left wing as well.   As luck would have it, Chance's friend hurt his knee on spring break too so he is on crutches.  Today at school Chance's friend was nice enough to share one of his crutches with Chance, until I picked him up for his appointment halfway through the day. When Chance was called down to the office where I was waiting, it was lunch time and he was all smiles limping along with the help of one crutch.
The soccer team will be minus two left wing players this week.   Chance should be ready to play again next week. I don't know about his friend.  I did tell Chance though,that if his friend ends up needing to stay home from school tomorrow, that he can come over here and they can play card games together as they elevate and ice their knees.

Chance, are you deaf?

This past week at soccer practice, the team was told to move down field during practice.

Chance didn't hear this little tidbit of information and continued to dribble the soccer ball up on the hill.  So, and I am not making this next part up,  one of Chance's coaches calls out and said, "CHANCE, WHAT ARE YOU DEAF? GET OVER HERE!!!"

At this point things could have gotten really awkward. This phrase is usually just used as a figure of speech.

Chance ran over to where he was supposed to be and he and his friends on the team started laughing.

Chance had not taken offense.  He thought it was funny.

Chance had a good excuse for not hearing because, hey, he really is deaf.

Now it has apparently become a big joke at soccer practice.  The same situation happened again, where Chance did not hear that the team was supposed to move down field but he saw the team moving down field and ran to catch up.

Chance purposely ran in between his two coaches and said, "WATCH OUT! DEAF KID COMING THROUGH!"

It should be noted that the field where soccer practice is, has a hill leading down to the track and beyond that is the soccer field.  At the top of the hill is a parking lot where the kids are picked up for carpool, so if Chance was on the hill dribbling the ball, with the sound of cars off to the side and the wind was blowing and his coach was on the field down the hill and past the track, it could have been hard for Chance to hear her.

Yes, Chance is deaf and apparently it has made for some humorous soccer practice moments this week.